Home
Articles
Animal Health
Does anyone use cowslips?

Does anyone use cowslips?

Does anyone use cowslips and what are your thoughts? This is a question I saw on a forum the other day. It is quite interesting what sort of responses farmers gave. Some thought they were wonderful, some thought they were too expensive, some couldn’t make them stick on for any longer than a few steps and some were making comments like “just make sure you don’t have any lame cows”. This last comment is very easy to say but most farmers I know haven’t got easy answers to their lameness issues, but I better not get side tracked.
Claw blocks are life savers for many cows. Without them there would be a lot more cows going to the works. This is as long as the blocks are put on correctly and, unfortunately, I have seen many instances where they weren’t. Sometimes we come across cows that have a block put on the sore claw and so it obvious that some people just don’t understand how claw blocks work. The idea of a block is to glue it underneath the healthy claw so that the sore claw is being relieved from carrying any weight therefore it can heal up much faster.
You should see an immediate improvement in the way the cow is walking if the block is correctly applied, because she is experiencing a lot less pain. A block should last for 3 or 4 weeks.
There are a number of different blocking systems available now, but my preference would be for the Demotec FuturaPad which use a wooden block as opposed to the shoe design and the main reason for that is because they are very easy to work with, are nowhere near as weather dependant in the time they need to set (cold and hot days) and, most importantly, we can position the block much better on the foot. There are several other very good systems available such as the Wopa or Bovi Bond blocking systems that also use a wooden block.
Often you find with the shoe type blocks that they sit too far forward and this makes the heel part of the block wear too fast or they even collapse in that part of the block. The cow has no choice but to walk on the heel of her foot which puts an enormous amount of strain on the tendon that is keeping the pedal bone down. This can cause such considerable stretch in some cases that there is a degree of lasting injury. The Demotec Easy Bloc system has minimized this effect with their shoe design so is a good choice if you prefer that style of block.
With a wooden block you can place the block as far back as you like. Obviously you don’t want put it too far back either. The back part of the block should be flush with the heel of the cow. It doesn’t matter at all if the toe is sticking over the front as long as the heel is flush. This way the block will wear much more evenly and that is much better for the ligaments. The block should also be flush with the inside of the claw and needs to be as flat as possible and not on an angle. Just remember that the block is there to support the weight of the cow. That can only be achieved if the block is placed nice and square and not too far forward. 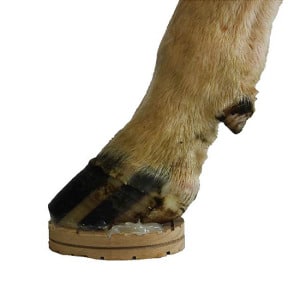 The price of a block is often challenged and it does pay to shop around as there can be big variations in the prices of the same products between retailers, but even if blocks were sold for $100 each they still would be cheaper than a lame cow.