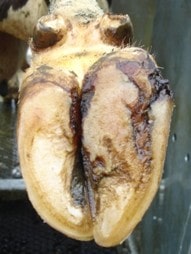 I was reading a recent article about a farmer who has overcome their lameness issues. In the article it is explained how white line disease is caused by long distance walking. “The sole wears thin and when there is pressure applied to the herd little stones will work their way into the hoof and cause infections.” This article again shows me how there are still people out there with a wrong understanding of what causes white line disease and most lameness issues in NZ. For one, this theory has no evidence to back it up, two, it doesn’t make sense if you think about it and thirdly there is evidence to show this theory to be incorrect.
In a previous article I asked people to show me some indisputable evidence to prove the possibility of this theory. I received some responses but no real evidence was presented. I won’t go into that now but I will on the other two points. One, the theory explained above doesn’t make sense. When cows walk long distances their hooves will wear faster – that is logical, natural, and if the live tissue in the hoof didn’t respond to that faster wear then the cow would end up with major problems. As a matter of fact, the whole herd would end up with worn out hooves and you would not be able to milk cows on big farms. You would need to keep the cows in their paddock because any unnatural wear on a track will cause a problem with worn out hooves.
Fortunately, cows are created with the ability to adapt just like other creatures. Just look at your own hands. If you do more physical work with your hands your body responds to that by growing more calluses. In the same way, the corium (live tissue in the claw) will respond to more wear by growing more hoof – especially when they have been walking on the tracks for months. However, sometimes we go to farms and all the hooves are soft and thin. This is true, and the question needs to be asked why is that? Why does the corium sometimes not respond in a sustainable manner? The only explanation I can come up with is that the corium is not functioning properly due to being unhealthy or maybe the thinner soles are not a problem to the cow. To answer the question on what makes the corium unhealthy is a whole article or articles on its own. If you want to know more you can attend one of our trimming courses and/or seminars to find out.
Second, I also want to show you some evidence of the opposite to be true. Do you notice that white line disease happens more on the outer claw – especially when there is more height difference between the claws? So, white line disease actually occurs more often with a thicker sole rather than a thinner sole.
We did a trimming trial a few years ago where we showed that if you trim the outer claw to the same height as the inner claw you end up with less lameness. So, by trimming the outer claw you make it thinner and yet you end up with less lameness. This goes against the theory that was described in the article that I was referring to. I realise that there is a lot more to the white line disease issue than I can cover in this article. I intend to cover a bit more of that in my next article and you can always contact me if you have questions on this subject.