Home
Articles
Animal Health
Laminitis: the biggest cause of lameness

Laminitis: the biggest cause of lameness 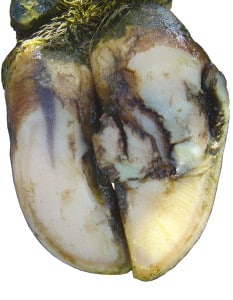 Last month I wrote an article on white line disease, the most common hoof problem that we have with dairy cows, and I mentioned that the commonly believed theories are difficult to support and that there has to be an underlying issue. If stones and pushing were as detrimental to the hooves as what we are led to believe then we wouldn’t be able to farm cows, and deer and mountain goats would have been extinct a long time ago. The underlying issue that we face, with probably 80-90% of our lame cows, is laminitis. Laminitis is by far the biggest cause of lameness and in dairy cows most of the damage by Laminitis is seen on the walking surface of the claws, the sole and white line region.

The next biggest cause of lameness is nowhere near as great as laminitis. Not yet at least, even though we may potentially get one if we don’t keep Digital Dermatitis under control. DD is potentially going to be a major problem for you if you don’t manage it well and that should start now. I will address that more in a future article, but let’s focus on this white line issue first.

Laminitis is a multi-factorial disease that basically results in unhealthy live tissue in the hoof – the predominant causes being diet and stress. If the live tissue becomes unhealthy in both claws then the claw that is bearing the greatest share of the weight will struggle more than the claw that doesn’t bear as much weight. For example, it’s the same as if two people walk along the road – one carrying a 30kg backpack and the other carrying a 10kg backpack. After a 40km walk the person with the 30kg backpack will have to work harder than the one with the 10kg backpack. These two people may be able to handle their individual load for that distance if they have trained for it but when they both come down with the ‘flu the difference in weight will be more evident. This explains why we see more lameness in the outer claw than what we see in the inner claw. You will find that the outer claw is usually bigger than the inner claw, and therefore bearing more weight than the inner claw. Even if the claws were the same height and size the outer claw would still get more fluctuation in weight than the inner claw due to the swaying of the body from left to right to left to right as the cow is walking. So, if the outer claw is becoming bigger than the inner claw it will become more vulnerable as it will be overloaded with every step the cow takes, and even when the cows are standing still in the yard.

So, what can you do to minimise lameness? Well, the answer to that question is to minimise the effect of the factors contributing to laminitis – namely stress and diet. If a cow has no laminitis I am convinced you can push that cow as hard as you like on a really rough track and it won’t cause any issue for her. Unfortunately, there are very few cows in NZ that do not have laminitis to some degree. Treatment for laminitis is primarily through hoof trimming. When you get a professional hoof trimmer in to do some preventative trimming for you, he or she will not be able to stop the laminitis but the trimmer should be able to trim the claw in such a way that the effects of laminitis are kept to a minimum, and therefore the productivity of the cow is kept high.

These issues are discussed in greater detail on our hoof trimming workshops, so call us if you would like to register on one near you.